This isn’t something I normally post about, but I want to show off a couple of painting projects that I did with my family this weekend!
But first, a plug for the site I used:
Looking for a site that has tutorials for easy-to-do paint projects? Check out Step by Step Painting! The paintings are easy to do, either alone or in a group (it's more fun in a group), and have nice designs. Their color schemes are also easy to alter.
Take, for example, the project Owl Silhouette Moon. It has a Halloween vibe, with a ring of red, orange, and yellow around the moon. Since it's summer, we wanted to do something without autumn colors. We changed the color of the ring around the moon to purple, and made the leaves green. Here are a few examples of how they turned out:

The other project we did was Cherry Blossom. The original purple ring around the moon was nice, but we'd just done that with the owl. So, we swapped out the purple for turquoise/light blue. There were more variations made on this one than on the owl one. Examples:

How's your summer going? Have you done any fun art projects, gone on any trips, read any books that you're dying to recommend?
Let me know in the comments!
Posted by Marlene Simonette at 9:23 PM No comments:

Email ThisBlogThis!Share to TwitterShare to FacebookShare to Pinterest
Labels: art, other

Of Tolkien, Tragedy, and Truth: As a young Tolkienite, I devoured "The Silmarillion." I fell in love with the epic elves therein and mourned their tragic fates. For the most part, I'm not a fan of reading tragedy, but nevertheless Tolkien's style and world drew me in, and eventually the great evil was defeated.
Posted by Marlene Simonette at 10:09 PM No comments:

Email ThisBlogThis!Share to TwitterShare to FacebookShare to Pinterest
Labels: hsj williams, other, reblog

I think I've finally gotten enough brainstorming and worldbuilding done to launch into an honest-to-goodness overhaul of this thing.
So, today I have for you a mock cover that I made to inspire myself a little while ago, the last version of the opening, and the reworked opening.
The previous version of the opening was drastically different. There was a prologue, told in a more omniscient/fairy-tale style POV (which is why it's in italics), and then the opening chapter was from the POV of the male MC.
The reworked opening jumps straight into the story, shows a bit of the worldbuilding that got me excited about this story in the first place, and starts from the POV of the female MC! 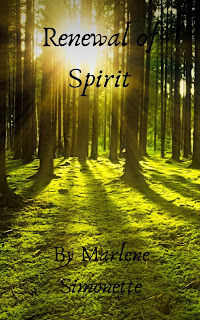 There once was a Wind Child who coveted nearly everything she set her eyes on. From seed to blossom, if it belonged to another, Loredanna wished it for herself.
Her husband Lando had long since learned that absolutely no one could talk her out of something. So it was when she wished for tea made from the leaves of a Witch’s laburnum tree, and refused to give him any peace, that her husband snuck into the Witch’s garden. Carefully, he pinched off the glimmering ocher flowers and placed them in his pocket.
Three nights in a row he did this. Three nights in a row he brewed tea for his lovely Loredana. On the fourth, he came face to face with the resident Witch—Kamille.
The crooked woman glowered at him with her crooked face. She demanded to know what he was doing.
Knowing he had no excuse for the theft other than his own weakness towards his wife, he dropped to his knees and pleaded for mercy.
The Witch agreed, provided he allow her one thing: to be godmother to his child.
Having no child at the time, he confusedly agreed. In time, his wife had a child. She named him Notah, and bestowed many blessings upon him in the hopes that he would be able to ward off any attempts the Witch made to claim him.
The blessings did little to prevent the Witch from taking him. They did, however, give him some degree of power over the Witch. And so, she was unable to use him as she had originally wished: as a source of power to augment her own magic.
In an effort to weaken his blessings, she forced him to use them constantly. If anything, her efforts seemed to embolden him. He accomplished each task she set to him, from planting magic seeds to slaying monstrous, seven-headed Beasts.
Finally, she decided to send him to the abode of another Witch.
“Bring me a casket from my sister in the Valley of Scions,” she told him.
“I shall fetch the sandapile most festinately,” he jauntily replied. “So festinately shall I fetch it, your cebocephalic head will ache.”
With a flurry of angry notes from her flute, Kamille sent him on his way.

Staccato drumbeats laced through the darkness. They cut through the groan of settling earth, called forth the beasts that slumbered beneath the surface.
In the midst of the music, Corinna ran. The darkness of the Settling was the best time to escape. When the broken earth reformed and healed, when the Witch Aranka busied herself with renewing her stronghold and corralling the monsters that were attracted to her corrupted Taide.
A hideous moan rumbled through the beat of the drums. The first of the monsters clawed upwards.
Corinna couldn’t see it, but she could feel it; close, not even a body’s length away, with dank breath and claws that scraped against the earth like iron against iron.
She kept running. She had to make it, before—
The music that had called up the monster caught her. The curse twined through her.
Swiping away her tears, she pulled against it. Her bones ached. The further she went, the worse it became: a scar wound down her arm; her leg bent; her arm shriveled.
Unable to continue, she collapsed. The curse pulled her back as surely as a chain about her neck.
From the darkness, Aranka’s fingers curled against her cheek. Her voice flat, she said, “How did you expect to leave without a means to fight me?”
A square box that Corinna had come to know well was pressed against her chest. Her kalimba. Her tuneless kalimba, for her rhythmless fingers.
She had thought that leaving it behind would finally give her the opportunity she needed; that leaving it would give Aranka one less thing to tie her curse to.
Corinna settled into the darkness and awaited the dawn, to see what new horrors Aranka would be harboring for the new world.
Posted by Marlene Simonette at 9:01 PM No comments:

Reblog- Specfaith: A Shadowy Argument for Christian Fiction, and Others

A Shadowy Argument for Christian Fiction- Shadows cast by stories can sometimes obscure the truth, but can Christian fiction paradoxically illuminate through shadow?

Is Prayer in Fiction Fictional?- What constitutes an unrealistic view of prayer in fiction?

Getting the Most out of Conferences- What an opportunity, then, for writers to pick the brains of these professionals at a conference, starting with a presentation—a pitch—of their own work. How else can writers find out if they have an idea that captures the interest of those who are experienced?

The first story that came to mind, in regards to the second article, was Failstate by John W. Otte.
It was action-packed, full of suspense, and the protagonist faced some tough decisions. All went well (for my reading, not the protagonist), until...
The prayer scene played to the "God of the Vending Machine" trope. It wasn't enough to totally ruin the book for me, but tears were shed. (And I'm upset enough that I haven't picked up the book for a re-read. It was an awesome story with unique use of powers, but the relationship between God and the protag was messed up.)
The protagonist doesn't really care about God. Until he's being pounded 6 feet into the floor, that is. Sure, in the course of the story he shot off a few "help please" prayers (who doesn't?), but he doesn't really "believe"/give much thought to God until he's given a deus ex machina. I mean, he made it this far "without help" (according to him, as literally none of his earlier pleas are answered in the positive); what's one more fight?
Maybe I'm due for a reread, since it has been a while since I read it, but every time I think about that prayer scene...okay, since I'm still dwelling on it years later, maybe it did ruin the book for me.
But, if that kind of thing doesn't bother you, you'll probably enjoy Failstate. It has a gripping story line and unique usage of powers. However, much of the story has a dark undertone. If you want a heavier (medium-weight? It wasn't nearly as dark as Reapers) read, definitely check it out.
Posted by Marlene Simonette at 8:42 AM No comments:

Keep up to date!

I Belong to Ciran's Company

Be Wary of Strangers

A Marvel fanfic set in the world of Convoluted Chronicles